I think the key to this whole New Jersey Bridge-gate will be Bridget Anne Kelly. 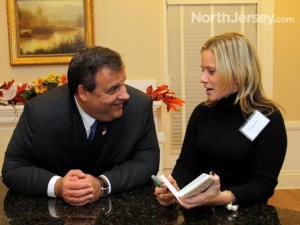 Any moment now, she is going to unleash on Christie, who accused her of being stupid and mendacious.  Steve Kornacki has an interesting explanation of why this is likely.  It has happened to Christie before.  Despite his protestations that ‘this is the first time his staff has lied to him’ and that he was ‘taken totally by surprise by their lying’, he had the exact same kind of problem with Bret Schundler, his Secretary of Education, who embarrassed Christie in August, 2010 by failing to submit a proper application for $400 million in Federal funding for the Race to the Top competition.  Christie was humiliated by Schundler’s bungling and threw him under the bus, calling him a liar and an idiot (sound familiar?).  Days later, Schundler released e-mails showing that he had tried to get Christie’s help on the application and told him that they were short the necessary data and achievements, demonstrating that Christie was aware of the problem but did nothing to help.

But let me digress a bit, with some personal background.  As I have mentioned, even though we lived in NYC, my parents bought a house at the Jersey Shore.  If you are a really wealthy NYer, you get a weekend place in Connecticut or the Hamptons; if you are upper middle class you get a place in Pennsylvania, Upstate NY or South Jersey.  The Jersey Shore was (and I guess still is) largely composed of Mayflower types, blueblood Republicans with a smattering of middle class and working class people.  Nothing like, really, the Brooklynites that star in the TV show.  I spent every weekend and summer at the Shore so I know NJ.

When you commute out of NY to NJ (and the reverse), you use one of three channels:  the Holland Tunnel (from Lower Manhattan), the Lincoln Tunnel (from Midtown and Queens/Brooklyn) and for everyone else in the world, the vast majority, every point North, West and even in many cases, South, the George Washington Bridge.  You are forced to go, briefly, through Fort Lee.  This is a major hassle, that bridge is always crowded, it costs an arm and a leg to go through one way (now about $12-16 per trip into Manhattan) and traffic jams are standard.  It is a headache that I avoid(ed) by using the Holland Tunnel, whenever possible. None of the three gateways is easy or fast, but the Holland is the best and the huge, multi-lane and multi-level, long GWB is the worst. 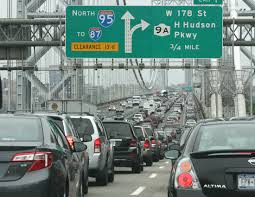 Just a couple of summers ago, I was visiting family in NY and NJ and had occasion to go through Fort Lee to access the GWB.  It was the usual nightmare, but one thing I had forgotten was, that out of the twelve or so toll booths that are spread across the road as you merge onto the bridge, 2/3 of them can be EZ Pass booths so people like me, using cash, are restricted to just two or three booths. As luck would have it the day I ran into a snag, I was on my way to see one of my most exacting relatives who lives on Sutton Place (East side of Manhattan) from another relative’s house in Bergen County (where Ft. Lee is located) and I was late due to heavy traffic (at 11 am on a Tuesday!).  When I emerged from the access road, onto the run-up to the toll booths, I was in the middle of twelve lanes/twelve booths and cars all around me were approaching the booths at high speeds.  To my horror, I saw that the only “Cash” booths were far to my right, literally Booths 11 and 12.  I was being swept toward booths 5 and 6.  I slowed down and tried to signal to get over to the far right, quickly, but no one (here is one drawback of people in the NY Metropolitan area – take no prisoner butt-kickers) would let me in (even with out of state plates, since I had driven up from Virginia).  I was forced to pass through the EZ Pass booth in front of me and, of course, with no pass to flash, for all intents and purposes, I ‘ran’ the booth without paying.  I dealt with that fiasco just two weeks later, receiving a lovely $60 ticket plus the fines and fees the rental car company slapped on me.  What a scam!

Just that one little trip from, let’s say, Fort Lee, New Jersey on the edge of the Hudson River at the George Washington Bridge (at roughly 115th Street on the Upper West Side), to 50th Street and the East River took three hours.  By the time I arrived at my destination, I was a mess: upset, tired, nervous, hungry.  It was awful and I am a veteran NYer/Jerseyite.  And, that was with all access lanes functioning normally.

When you interfere with the George Washington Bridge, it is like sabotaging the Grand Cooley Dam or the Port of Long Beach or the Tennessee Valley Authority. This is a major infra-structure, public works “monument” that is vital to economic and social as well as safe functioning of millions and millions of people as well as businesses and commerce.  It has national and international, indeed global ramifications. It is not just about jamming traffic for a small, insignificant town like Fort Lee.  It is about a panoply of other complications that we have heard about all week long now including interfering with 9/11 observances, homeland security evacuation routes, EMF response, police actions, school buses and of course, millions of harried commuters who don’t do this just once in a while, but twice a day, Monday through Friday, sometimes in very inclement weather, and in the dark.  This, to paraphrase Vice President Biden, is a Big Fluffing Deal. 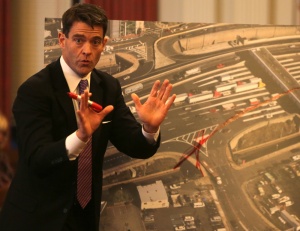 So let’s get back to little Miss Bridget.  Can any rational person really believe that this underling woke up one morning and concocted a spontaneous plan to fluff with a major public work like the GWB?  And that she didn’t have to have the imprimatur of the Governor’s militaristic, tight-knit, heavily monitored inner-circle staff, including the Grand Poobah himself? Do we know anything about NJ and Christie? Has anyone been paying attention to this man, who has denied being a bully? The man that even his allies describe as belligerent and vindictive? The man who says he has to fire everyone for poor judgment but exonerates his own terrible judgment in picking them (shouldn’t he fire himself by his logic, ergo)?  To think that all this went on for days, weeks, months without the knowledge of  CC himself is just a bridge too far, it stretches credulity to the limit.

I have a lot more to say about this topic, which I will continue to lay out in coming posts. But let me tell you who is the object of my wrath at this mess: the Democratic voters of the deep, dark, blue state of New Jersey. Yes! That’s right, those are the real idiots in this catastrophe. The people who in November of 2013, after how many years of this man, voted him overwhelmingly back onto the throne.

Those are the real culprits.

We haven’t heard the last of the six dwarfs (Wildstein, Samson, Stepien, Egea, Barone and O’Dowd), you can be sure and I suspect snow white Miss Bridge-t-oo far will be dropping a shoe or two in the very near future.