There are so many compelling current news stories that grab my attention that I have to filter out what I read so I am not overwhelmed. That is largely because they are at base about human behavior, which is after all, my chosen field and my main interest in life.

Because I am a psychologist, focusing on children, for the most part, when I see things that impact that group specifically, I try to study and develop an informed opinion about them.

Two topics have given me material to mull over in the past few years and continue to evolve in the news. I will not give the minute details of these two subjects much space here, because I am confident they are easily located elsewhere, far more precisely and more clearly laid out so I need not rehash the stats and facts.  I would prefer to offer my opinion, based on life experience, professional training, interest in the topic area and having engaged in a great deal of reflection and discussion.

California is about to become the next state to legalize recreational marijuana. I am both against legalizing and using it (other than for genuine medicinal purposes, of course).  This is not because I have a moral or religious or philosophical objection to intoxication. So many things can be intoxicants: love, sex, money, food, caffeine, power, knowledge, beauty  — this list goes on and on. There is nothing wrong in my mind with the transcendence that many forms of intoxication contribute to making earthly existence tolerable and interesting.

What I think is wrong with marijuana is what is wrong (or right, if that is your inclination) with all potent stimulants/suppressants, including controlled and uncontrolled pharmaceuticals, herbal remedies, tobacco, alcohol, and all related products.  They are ultimately unhealthy not only for the body, but especially for the brain.  This is particularly so for the developing brain up to the mid twenties.

What you legalize, you endorse. A glaring example of how true this statement is, is the impression that all too many people have that the legalization of abortion means endorsing abortion.  When I was in graduate school, we had a compelling course on the social impacts of legal decisions.  The social psychologist who taught this course emphasized the importance of instituting laws to induce people to comply with moral rectitude.  An example would be civil rights.  It is very hard to change attitudes when people are allowed to follow their will, voluntarily.  They must be forced to do so, and eventually, the law will become prevailing sentiment.

Marijuana is addictive in 9% of users, as opposed to 15% of alcohol users and 32% of tobacco users.  So, one could argue, that if one were to choose one addictive substance (not just behavior, but physical intoxicant), marijuana appears to be the most benign.  But that assumes, for one thing, that people who want to or start using marijuana, will continue to use it exclusively and not other intoxicating substances.  Another assumption is that all three affect the body/brain in the same way, while perhaps affecting outward behavior differently. For example, it is widely agreed that an alcohol user’s behavior is the most overt and potentially dangerous to him/herself and those around him/her. Some believe that the marijuana user is the most mellow and withdrawn of substance users/abusers and I would agree, it seems to be so. Tobacco has a temporarily calming effect that is misleading, as it has been shown to make users irritable and more aggressive over the long term– statistically.  But the internal physiological systems effects are all different, and the short- and long-term impacts of cannabis, especially the more potent versions currently on the market, have been less studied.  There has been unsettling research that suggests a loss of IQ points in adolescents, however. More of this kind of work is likely to emerge in the coming years.

While I am on the topic of statistics, please let’s all stop using anecdotal incidents (notice I didn’t say ‘evidence’) to support our unstudied and unscientific beliefs.  The only way to know if something is so, outside of a religious or spiritual epiphany, is to

subject it to systematic, empirical examination.  There is no valid argument against such a test for proof, so we can move on.

Marijuana once legalized will be aggressively marketed to younger and younger users. While I am strongly for decriminalization of use, I am not for legalization for many reasons.  Our children are subjected to enough noxious environmental factors, whether they be poor parenting; gun violence in schools, movie theaters and malls; predatory advertising for harmful products and services; food, air, and water pollutants, including toxic chemicals, noxious fumes, x-rays, radiation; psychotropic drugs mis-prescribed to curb normal behaviors (especially in boys); sports drinks loaded with stimulants; inappropriate and disturbing images that frighten, worry or sexualize them at too early an age; online predation; computers introduced prematurely; adult pressures to over-perform and compete; concussive events in contact sports; interpersonal stresses including bullying and gender-specific expectations that some must strain to satisfy: honestly, there is just too much that the average young person is dealing with right now, to add yet another one.  Let me say one more thing, that I know is controversial: I do believe marijuana can be a gateway drug in some, addictive people.

May I also offer my opinion that, when we narc our problems to quash them, they simply go underground, fester, grow unheeded and breakthrough later in a far more insidious and dangerous form.  People who are addictive have an underlying pathology (on a sliding scale of severity) that should be identified and dealt with on some level, clinically as they become more acute and dysfunctional for daily life in social systems.  Irresponsibly starting an addiction is foolish at best and when this happens in young children, I hold their parents responsible.  In fact, I consider parents to be responsible for the behavior of their children in general up to the age of majority, at least 18.

My counsel to parents and children is this: do nothing to harm your brain or body.  That includes violent contact sports.  And parents must walk their talk.  A cabinet full of anxiety drugs sends a powerful message to children.  Be a consistent, strong role model for your children, if you want to avoid their having problems later on.

[And just as I am writing this, I hear the sad news that Philip Seymour Hoffman is dead of an overdose, at 46 More to come on this complex topic.]

I have no idea (nor need to know) if Knox is guilty or innocent.  It was a heinous crime, whoever was involved.  Those responsible should spend a great deal of time in prison, hopefully being rehabilitated.  If this was Amanda, she needs to face up to it.  If this was not Amanda, if I were in her shoes, I would be heading to a safe country that does not have a strong extradition agreement with Italy.

However, where she and her parents were derelict, is an area that is easily addressed and avoided and what I would advise anyone stepping outside their own environment, i.e., the town where you spent your first 18 years, whatever that town is, is study the place you are headed, thoroughly.  Then firmly resolve to conform to those mores and norms, and do not waiver until you leave. Why do you think anthropologists go to so much trouble and many years of study before attempting to live in another culture, no matter which one?

A friend of mine, who grew up in the same affluent circumstances that I did, in the northeast, took a road trip when he was 19, in his dad’s red convertible Ferrari with NY plates, driving from Manhattan down to Miami.  When he hit the south, he was pulled over and marijuana was planted in his car by local authorities.  He was jailed, subjected to a fair amount of physical and psychological intimidation and only released after a great deal of expensive lawyering by his family.  The South and its value system, and attitude toward Yankees, are well known to Americans, so I needn’t comment on them further.  My friend Mark should have been aware of how his ‘persona’ would be perceived in that atmosphere, before he took that kind of trip and modified his conduct accordingly. 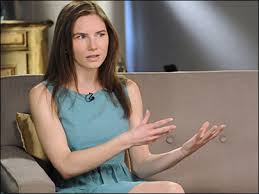 If you have spent time in Italy and if you are female, you have a very clear idea of the environment and the perceptions of Americans, especially young females, especially American, young, attractive, rich females in a chauvinistic, questionably ethical, influence-driven, ancient culture like that one.  You would not do most of what Amanda Knox did (again, take a look at her conduct from the minute she set foot on Italian soil), especially in a medieval university town.  It’s simple, again, do not set foot out of the town you spent the majority of your first eighteen years of life without learning all you can about the path you are crossing, once outside that town.

My counsel to parents: be smart – help your children abstain from both these destructive circumstances and practices.