Alas, through the looking glass

Look out what you wish for. This is the latest chapter in my ongoing love affair with my Nikon camera.  It seems none of my passions are of my own choosing. They come seeking me out.

Like Alice, when I am smitten with a project, I fall through some aperture and find myself in a wonderland of new sights and ideas.  That is what’s been happening again and again  since I got this camera and each of its exceptional lenses.

Not all glass is alike.  It is truly incredible to me that by changing one small mechanical component, the capabilities of the camera itself are transformed. And the minute I saw that, I started hankering for upgrades to everything. Natch.

With each of the special lenses I have gotten for this camera, I have been astonished at how effortlessly it helps me take satisfying pictures.  I had been especially impressed with the 35 mm prime lens, because I was able to take, not only real-life-simulating pictures of what was right in front of me, but things far away.  I am still wondering how that was possible with a lens that has only one distance parameter.  The strength of the 35 mm is that with it the camera sees what the human eye sees (well almost, the human eye is the most amazing lens of all).

That is, until I saw what appeared on the other side of the 16-85 mm glass that I just got.

Last Saturday, when the lens arrived, I felt like Ralphie getting his Red Rider BB gun.  Part of my anticipation was the anxiety I was feeling that this latest trinket was not going to work with my camera body.  You have no idea how elated I was when I screwed it on and peeped through the viewfinder at my family room.  I immediately took pictures of everything around me, including six or seven shots of Psyche, whose quizzical expression said it all.  She has wondered for years why her humans so often peered and snapped at her through tubes and boxes. 🙂  I took a set of pictures of her in her cage (if anyone is interested, I will add one here) at different settings to see how they would change and what the effects were.

On Monday, I was itching to get out and take some real pictures with this lens.  As I have mentioned before, Valencia is not exactly a mecca of excitement. At first I was lamenting the fact that the only places we could think of to photograph here, were places we had gone and shot up ad nauseum in the past.  But then it occurred to me that it didn’t matter. I realized that I have seen some amazing pictures taken of sewer drains choking with sludge and rusty bottle caps on seedy oil-cloth (well, I may be embroidering here), so it is up to the photographer to make the mundane marvelous.

The strength of Valencia is its clear skies virtually 360 days a year.  Monday, Labor Day, was typical: scorching hot and cloudless.  Learning from my last tedious foray, done too early in the day, which I cranked about in a past post on my 10-24 mm lens, we went out this time at 5:30 pm, to pay our Homeowner’s dues at their office.  Even though that complex is pure 2000s boring, I took a few shots to test the lens. See if you can spot the HOA office here [yes, that’s where the magic happens], these guys are pretty humorless and I think the office matches their atmosphere, LOL.

Then we headed over to the Town Center and revisited the movie theater/restaurant/retail hub that I captured with the Canon and its 18-55 mm in the spring, 2013.  By this time it was after 6 pm and we had the right light, at last. In fact, the photos are numbered — but not placed here — in the order we took them (only a handful are posted here, I will be sharing the rest on Flickr this week as I took about 150 altogether).

Admittedly, I really played around with the camera and lens as well as the processing in this series.  I literally wanted to see if I could do something interesting and slightly different with my ordinary, Americana-everywhere shopping center and transform it just enough to be attractive.

For some reason, we ran into all sorts of annoyances.  One was a man and his dog, who parked at and in the reflecting pool, the dog that is — the man was on a bench.  It was silly of me to be put out.  What was amazing was that he had this dog romping and splashing in what is supposed to be a clean, purely ornamental water feature and the security guard was chatting with him instead of shooing him away.  At first that bothered me.  Then, as often happens, Geoff and the guy started talking and I ended up feeling badly that I had been miffed about the dog.  He is a medic alert, trained Shepherd whom the elderly man described as his best friend.  I felt ashamed of myself and went out of my way to praise the dog and cheer the man up.  He said it was the first time he had been well enough to come to the mall and sit by the fountains.

Then there were a group of HS-age skateboarders who were not only making a racket, looking really slouchy in low-riding pants and muscle-shirt tattooed skin but also sporting all kinds of crazy hair and face ornaments. I wasn’t in the mood to have them in these particular pictures and one of them photo-bombed me, in the process of trying to avoid them.  They were parked in one of my favorite places to take pictures, so I couldn’t get even one decent shot of it.  They were also smoking maryjane pretty nosably and yet the little security guard was too afraid to go up to them.  Well, I certainly wasn’t, but Geoffrey grabbed me by the arm and reminded me I didn’t want to “go there” and be one of those, ‘children-get-off-my-lawn-types”. (The little kid in the picture was a hanger-on and looked pretty benign). 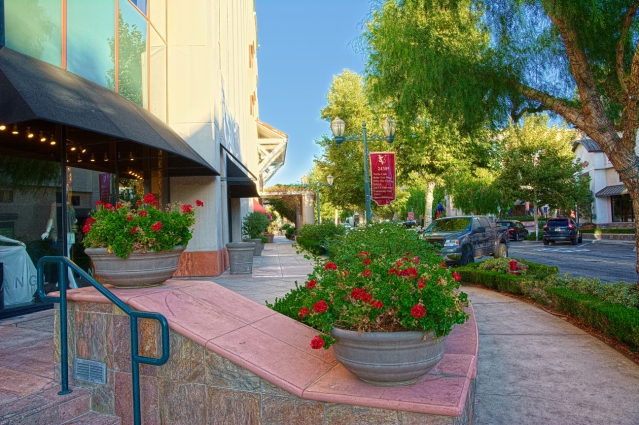 When night was getting close and we decided to stop and get a bite to eat, my favorite spot by the big window once again looked out on these kids who had now moved over toward the restaurant we chose.  Wouldn’t you know it? Man, am I becoming a crochety ole biddy.  It was just about the right light to take the last picture that I will be putting up over on my Flickr page, that I refer to as my “blue-hour” shot.

But I usually try to save some of my faves for the blog — like this one as the sun was dipping below the buildings that shows a bench on the left — yippee, almost strobist –, so these are not going up on Flickr — just here.

The alas part of this saga is my now full blown runaway addiction to getting newer and fancier lenses.  O-M-G, not good. I just saw a photo one of my Flickr friends, Eleanor, took with her new Nikkor 80-400 and almost fainted. We’d be eating stone soup for a month. [And, speaking of bank, I have to laugh, my NYT delivery person drives a Town & Country one year newer than the one we had a few years ago — how is that possible!] No! I have to be strong. The promise of more ventures in wonderland, even if it is just LA and Valencia, more in particular, is so alluring I know I am hooked.  So next up, another fisheye lens but this time for the Nikon. You pros out there, please tell me what other lenses you think I might need.

I’ve chewed on the mushrooms, now I need the glass. 😀

Images: Beth Byrnes archives.  Click on them to enlarge, if you care to. All of these were shot in RAW, converted to TIFFs, then JPEGS for loading here. They are in sRGB for proper display on most screens and tweaked in Photo Ninja (I still haven’t tried out my new Lightroom 5!).

6 Comments on “Alas, through the looking glass”